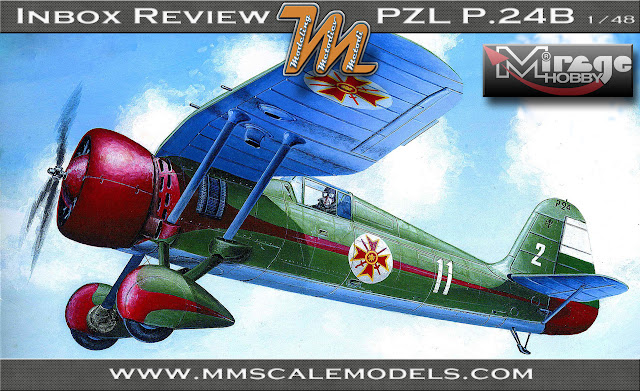 The PZL P.24 was developed as an export version of the PZL P.11, a gull-wing all-metal fighter designed by Zygmunt Puławski. The P.11 was powered with a license-built Bristol Mercury engine. The license did not permit export sales, so the French Gnome-Rhône company proposed using their engines in the P.11. The first P.24/I prototype, based on the P.11a and powered by a Gnome-Rhône 14Kds 760 hp (570 kW) engine, was flown in May 1933. The second P.24/II prototype, named the "Super P.24", set a world speed record for radial engine-powered fighters (414 km/h). The third P.24/III prototype was the "Super P.24bis" with a more powerful 14Kfs engine. The type was shown at the Paris air show in 1934 attracting great interest from the participants.


The aircraft was conventional in layout, with high wings. It was all-metal and metal-covered. The wings had a gull-wing shape, with a thin profile close to the fuselage, to provide a good view for the pilot. This configuration was developed by Zygmunt Puławski and called "the Polish wing". The canopy was closed (apart from prototypes). An internal 360 liter fuel tank in the fuselage could be dropped in case of fire emergency. It had conventional fixed landing gear, with a rear skid.


The armament was a combination of 20 mm Oerlikon FF cannon and 7.92 mm Colt-Browning machine guns in the wings.

The PZL P.24 B "Jastreb"(Hawk) plastic scale model kit in 1/48 scale from Mirage hobby comes in small, side-opening box with nice box art depicting Bulgarian PZL P.24 in flight.
On the back of the box there is full color, four view drawings of the aircraft in one of the marking options. 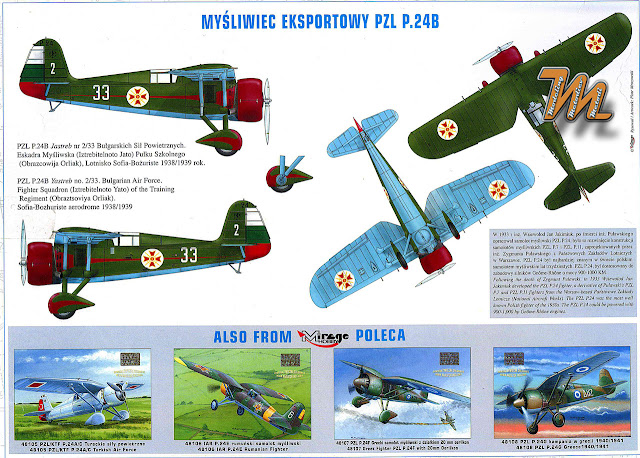 This  plastic scale model kit is comprised of three grey plastic sprues, one transparent sprue, one photo-etched fret, acetate sheet, six resin parts, decal sheet and assembly instructions. Quite a good contents in my eyes. The initial inspection showed some flash here and there bit is by no meanings a lot. The ejector pins are carefully placed so they do not get in the way.

The assembly instructions are printed in black on one side of A3 size paper in portrait orientation. The instructions are on one side of the sheet and the information about the plane and two out of three marking option schemes are on the other. The third marking option scheme is on separate A4 sheet.
The assembly is divided in 8 major steps but some are quite simple while others are very complicated. Some of the steps are too crowded and it is quite difficult to understand the assembly sequence as it isn't clearly stated (if at all). Colors are given in Humbrol and Vallejo codes.

The PZL P.24B is version of the aircraft made for the Royal Bulgarian Air Force. Therefore there are only Bulgarian decals available in this kit.
The decals look very well made. Everything is in register, the colors are solid and the carrier film looks thin. 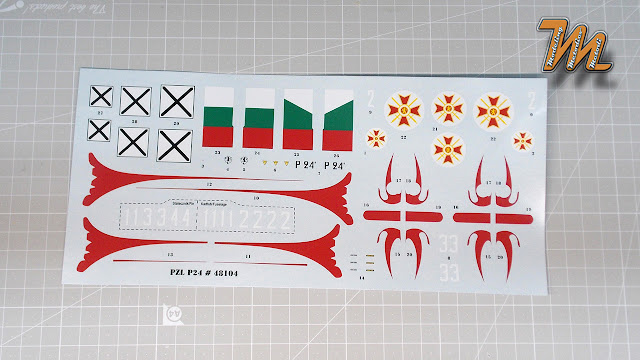 Many details go into the cockpit of this scale model, both plastic and photo etched... there is even instruction to add detail to the rudder pedal from stretched sprue. There is structural detail molded on the inner side of the fuselage halves but no front and rear (low) bulkheads which might lead to visibility inside the fuselage. For that reason you'll either have to add the appropriate detail or build some bulkheads to hide the gap (check your references).
The photo-etched fret provides the instrument panel (along with acetate instrument faces), seat belts, cockpit floor and other bits and pieces.
The clear parts are looking quite decent with good transparency and acceptable distortion. Further more the top part of the canopy was rarely used on the real aircraft which leaves you only with the windshield to install.
Earlier in this review you probably read that the ejector pins marks are positioned out of sight... well there is one exception on the cockpit floor and it looks pretty nasty to get rid of. Perhaps a motorized tool will be the best way.
Overall the cockpit have the potential to become absolutely stunning and in my opinion every detail needed for that is inside the box... its up to the modeler.

The corrugated surfaces on the tail and the wings is very nicely reproduced but on the lower wing halves and on the tail there are some ribs that are too prominent in my mind. The other surfaces have a bit granular finish which will have to be sanded smooth in order to get good paint finish. The panel lines are good and consistent but if you decide to sand the fuselage (and other parts) they'll perhaps need some deepening. On each side of the fuselage, on the root of the vertical stabilizer, there are sink marks (one on each side) which have to be filled. I test fitted the fuselage and the wings. The fit is good even if I haven't cleaned them thoroughly. The inner edge of the lower halve of the wing will have to be trimmed otherwise there will be a step on the wingtip.
Two of the differences between this scale model kit and the other PZL P.24s from Mirage Hobby are the radiators and the inner cartridge ejection chutes and they are provided in resin.

The other difference from the rest of the PZL P.24 kits is in the engine cowling and propeller area. The three-blade propeller is molded in one piece which I like a lot. On the back side of each blade there is sink mark that will have to be filled. The engine is nicely reproduced together with the PE parts and the resin exhaust pipes it should be fine.
The struts for the wing and the wheels look solid. The wheels are rather simple but they are simple on the real aircraft as well.

Overall i think that this plastic scale model kit from Mirahe hobby captures very well the PZL P.24 B The kit provides You with sufficient detail to build very detailed scale model. There are a few things to watch out for but nothing major issues. I highly recommend this scale model kit to every one interested in the PZL P.24B or in The Bulgarian Air Force (I haven't built that kit yet so this conclusion is based solely on dry fit and looking at the details)