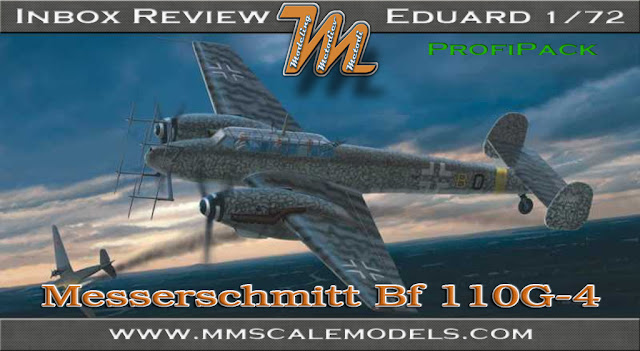 The evolution of the Bf-110 line was to continue in 1941 with the introduction of the Me 210, a result of the development of the original design coupled with combat experience. Major ongoing problems with the prototypes and unspectacular results in combat halted production of Me 210 at under 300.
The role of the heavy fighter and fighter-bomber for the Luftwaffe would need to continue to be served by the Bf-110, calling for a list of changes and modifications. The installation of the newly developed DB 605 engines (1470hp at higher performance) allowed for the development of the stronger and aerodynamically refined ‘G’ version, represented in combat by the G-2 and G-4.
Although the G-2 variant found its role especially as a heavy day defender, the domain of the G-4 was that of the night fighter. The nocturnal air war over Germany in 1943 saw the RAF targeting German industry and logistical centers.
Night air combat was very different from that of daylight dog fights not only due to physical conditions, but also through the necessary development of specialized tactics. Instead of aerobatic maneuvering and jockeying, it became preferred to slowly position behind the target, get in close, and hit hard.
Naturally, acquiring a target in low light presented the need for entirely new approaches on its own. Aircraft during this timeframe needed new armament combinations and electronic equipment to maximize usefulness. Generally, there was no great use for single-engined developments, although there were successful evolutions of the Bf109 and Fw190 in this role.
The bulk of that duty was carried out by twin engine types whose original role was either that of heavy day-fighter or, more likely, as bombers, such as the Bf-110 , Ju 88, Ju 188, He 219, Me 262, and others. The Bf-110 G-4 was the most prolific of all of them. The required equipment for the G-4 was an on-board radar system, mainly the FuG 202, FuG 220, FuG 212 (+SN-2) and FuG 218.
Part of the basic armament was often the installation of 30 mm MK 108 cannon in the nose, and 20 mm Schräge Musik cannon (slang term for 'Jazz Music', prohibited in Germany at that time) used when the target was above and slightly ahead of the attacking fighter. Although the Luftwaffe was unable to stop the RAF raids, which steadily increased until the end of the war, the Bf-110 G-4 and their crews deserve great respect for their combat success.
As a nightfighter in the G-4 version, thanks to a heavy forward firing armament and radar, they soldiered on literally until the very end of the war. As such, it was the nightfighter role that would prove to be the most significant for the Bf-110 during the course of the Second World War.
Source: the instructions.

The Bf-110 G-4 scale model kit comes in a medium sized, top opening box with nice, dark (it is a nightfighter after all) box art.  On the sie of the box there are four full color profiles of the available marking options. The kit is ProfiPACK edition. This kit is the 2013 edition of the initial new tool release from 2012.
The kit is comprised of 7 gray sprues, 1 transparent, 2 photo-etch frets, paint masks, decals and instruction sheet.

The decals look well made and everything seems to be in register. They are printed with very high level of detail which is most evident on the instrument panel decal. The carrier film seems to be very thin. From what I can recall, building Eduard kits, the decals behave nicely and are trouble free.

There are four marking options provided with this scale model kit:

The instructions come in full color printed on thick and glossy paper. This strengthens the impression for premium product. On page one there is box art impression and historical and technical information about the aircraft as well as one color profile. Page two gives the warnings, symbols legend, sprue schemes and color call-outs. Paints are given in Gunze's Aqueous, Mr.Color and Mr. Metal Color ranges. The assembly steps spread from page 3 to page 11. The instructions need some time to get used to but if you are familiar with Eduard's instructions they are actually really easy to follow.

The assembly of this scale model commences from the cockpit. It is very comprehensively detailed with nice and crisp details and even better photo etched metal elements. The entire third page, big part of page 5 and some of page 6 of the instructions is occupied with the cockpit assembly, the amount of parts used is massive.

The undercarriage of the aircraft is well reproduced as well. In addition to the plastic parts there is some photo etched detail available. My only criticism is that the wheels are not weighted.

The wings are made of two upper halves and one lower part. The fuselage is split in two, lengthwise. The engines nacelles are separate parts which are divided in two lengthwise as well. There are 8 different nose parts on the sprues but 6 of them are not to be used.
The surface detail on the entire airframe  is excellent, the panel lines are crisp and consistent and there is some riveting detail on certain areas. There is abundance of engraved access panels. Two auxiliary fuel tanks are supplied. There are two types of exhaust shrouds which are used for the different marking options.

There are four MGs inside the gunners part of the cockpit and two nose mounted cannons. The antenna arrays are very fine and well detailed even though they are so tiny. 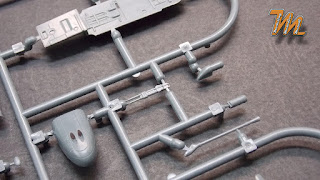 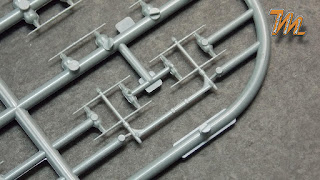 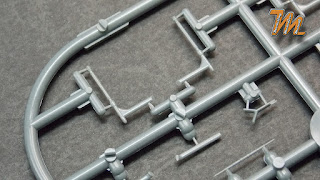 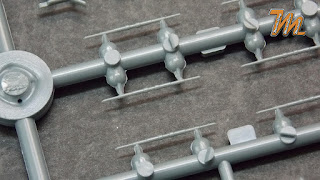 The sprue holding the transparent parts is large and it is circular. There are a lot of parts on it but some of them are not to be used. The canopy parts are very well made with good transparency and minimal distortion, except where small distance between two frames and curved profile combine. The big greenhouse canopy is broken into pieces so you can pose everything in open position. 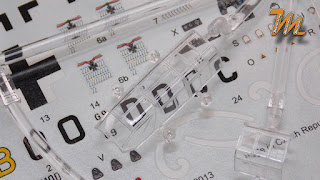 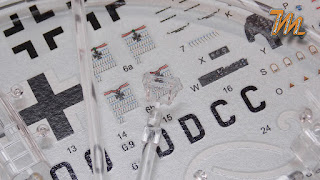 There are two photo etched frets in this kit. One is pre-colored and is mainly for the cockpit, but there are some parts for other places too. The other fret is brass and is a jig to help you assemble one of the antenna array types - isn't that nice? 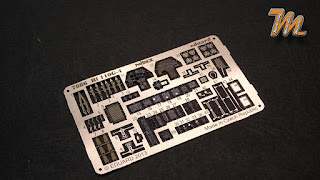 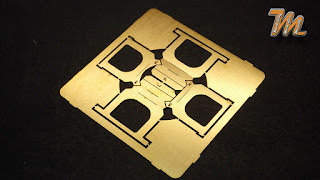 The Messerschmitt Bf-110 G-4 kit have very impressive quality, if its possible to judge this by only looking at the sprues. There are plenty of details so the scale model can be very impressive even built OOB. The photo etched parts might be a challenge to some of the less experienced modelers but other than that I highly recommend this kit to everyone.