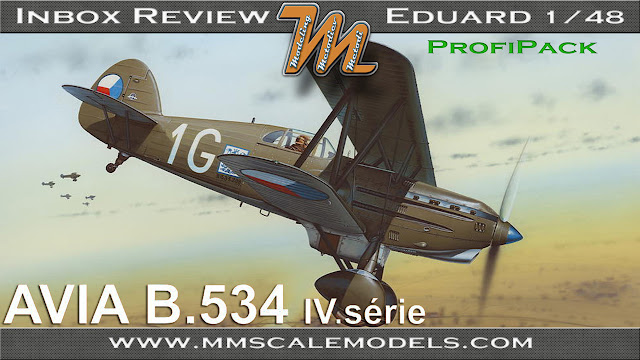 The Avia B-534 is a Czechoslovak biplane produced during the period between the Great War and World War II. In 1932, the Czechoslovak aircraft company flew a first prototype of a single-engined fighter biplane, the Avia B-34, designed by František Novotný. The B-534 was designed as a single-engine biplane fighter with a license-built Hispano-Suiza inline powerplant, and fixed landing gear. The air forces of the 1930s were reluctant to abandon the maneuverability and climb rates of biplanes for the speed of monoplanes, even in the face of new and better technology.
The most important change in IVth series from earlier series was the enclosed cockpit. The IV series also enjoyed a metal light alloy Letov (Hochfeld) Hd-43 propeller. The various refinements allowed the IV series to have an increased speed of over 200 mph, and this placed it on par with the best of its contemporary biplanes. A common alteration to the IV series was the replacement of the tail skid with a tail wheel.
The superb performance of the aircraft was demonstrated at a flying exhibition in 1937. The aircraft was tested against the best in the world at the IV International Air Meeting at Zurich's Dübendorf airport. The B-534 entered three of the competitions. The first of these tested climbing and diving. A GermanBf 109 took first place and a Henschel Hs 123 pilot pushed his biplane to claim second. The B-534 took the next three positions. The 534 outflew every other fighter participating, but the Messerschmitt Bf 109 – and even then, the Avia was only 11 kph slower than the German aircraft.

This scale model kit of the Avia B-534 IV serie is based on Eduard's previous release of the III serie and dates from 2007.
The box is standard top opening one with nice "painting" box art.  When open it you will find four solid plastic sprues (in my case three gray ones and a olive colored one), one transparent, photo-etched fret, masks, decals and instruction sheet. All comes in one bag with the transparencies and the PE in their own.
Regardless of the relatively small and simple canopy the masking sheet is rather large. More than 1/3 of it is with thin stripes to help enhance the ribbing of the wings.

Sprue A holds the upper and lower wing of the biplane, horizontal stabilizers with separate elevators, rudder, two sets of wheels and the cockpit base.
Sprue B contains the bracing struts for the wings, cockpit parts, armament and propellers.
Half of the parts located on Sprue C are marked as unused. The rest are for the suspension / undercarriage and the wheel fenders.
Sprue E is holding the fuselage halves the instrument panel,the deck behind the cockpit, cowling cover and the tail.
Sprue F is the transparent one and is for the canopy parts. 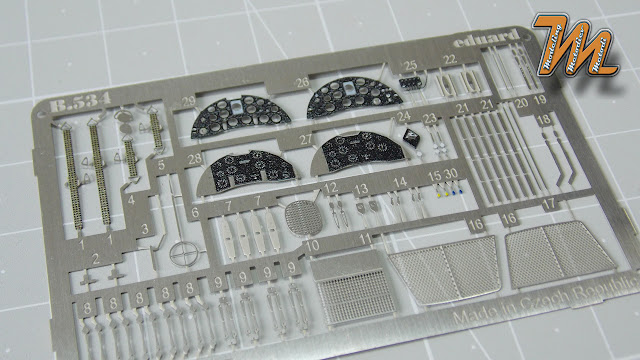 The instructions come in full color printed on thick and glossy paper. This strengthens the impression for premium product. On page one there is box art impression and historical and technical information about the aircraft as well as one color profile. Page two gives the warnings, symbols legend, sprue schemes and color call-outs. Paints are given in Gunze's Aqueous, Mr.Color and Mr. Metal Color ranges. The assembly steps spread from page 3 to page 8. The instructions need some time to get used to but if you are familiar with Eduard's instructions they are actually really easy to follow.


Cockpit - the office is very detailed.  As usual with profipack kits, the plastic parts are supplemented with photo-etched details.  The plastic details are crisp and with almost no flash present.

The fuselage is split in two sides and a cowling cover. Fine raised rivet detail is provided where appropriate. On rear portion of the aircraft the ribbing structure is also recreated.
The ventilation slots on the cowling are nicely recreated. The exhaust stacks are molded on the fuselage sides so some work will be needed to give them more realistic look.
Ribbing and riveting detail is molded on the wings and control surfaces. The elevators and the rudder are positionable which is great.  Part of the wire bracing attachments are provided on the PE fret. The wires positioning is shown on the instructions.

There are four 7.7mm machine guns on the airplane, the barrels and the gun bodies inside the fuselage are provided with the kit and look rather decent. Optionally you can attach six bombs under the lower wing.

Here you can see the two sets of wheels that are provided with the kit along with the other undercarriage parts; the wheel fenders; intake grille, propellers and spinner.

There are two options on the clear sprue. One of them is one piece, closed canopy. The other choice is three piece positionable canopy. The frames are nice and look in scale. The canopy is with excellent clarity and distortion free. 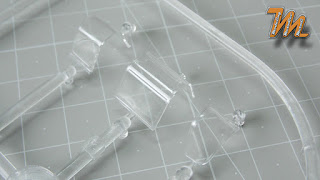 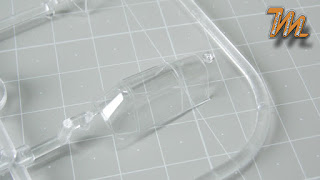 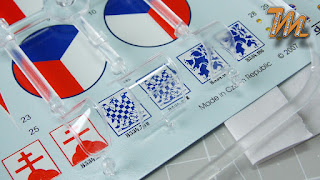 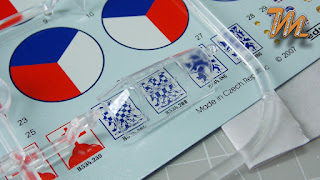 The Avia B-534 IV profipack kit is looking excellent inside the box. If it goes together as good as it looks It'll be a breeze to build. The PE fret gives that little additional detail that will push this scale model on the next level. I am looking forward to the time it'll land on my desk.